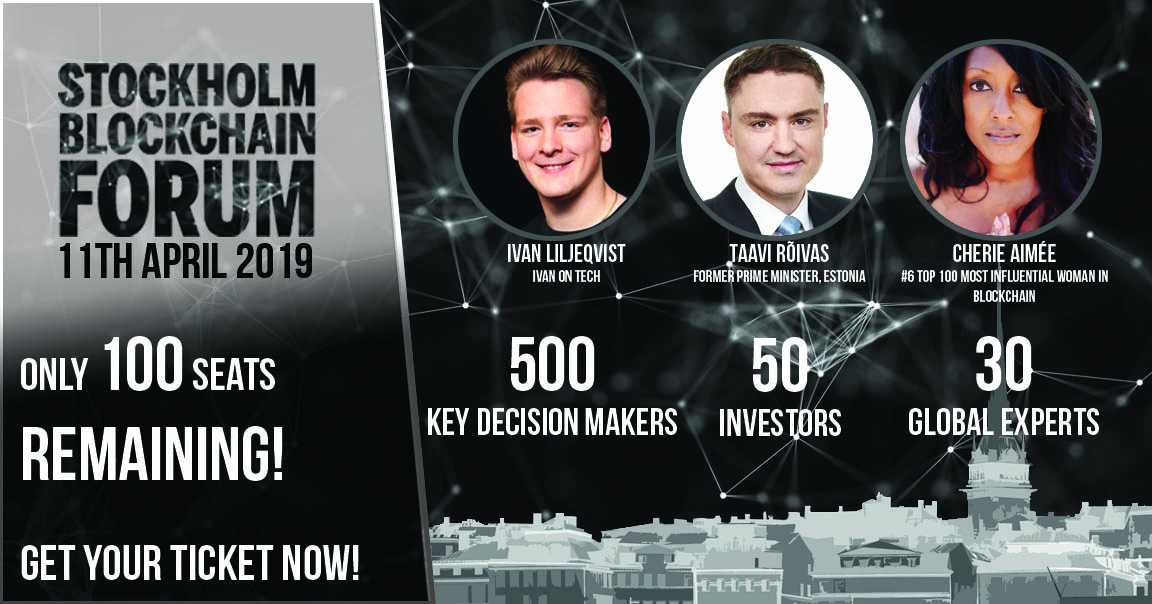 Sweden and the Nordics is home to an innovative start-up environment and a strong blockchain and crypto community. The Stockholm Blockchain Forum taking place on April 11th has announced a stellar show with Ivan on Tech, the Former Prime Minister of Estonia, and Cherie Aimée, ranked as the 6th most influential woman in blockchain.

On the 11th of April, Techbook is organising the first Stockholm Blockchain Forum at the Stockholm International Affairs in Älvsjö. The event is bringing together blockchain experts from across the globe to network, forge new business relationships and educate traditional industries on how to implement blockchain technologies. The event is designed along the lines of an online forum brought into a physical space, a concept championed by the former CEO of Optimizer Invest, Carla Maree Vella, who is appointed Director of Content for the event.

“What we are trying to do is to play a bit on the word ‘forum’. As we know in the world of the interwebs, a forum is where people communicate and share information and thoughts. A lot of the conferences I visited last year were very much one-way communication-style. The idea here is to be able to not only to listen to panels and keynotes, but to strategically involve delegates in the discussions through structured networking events and specialised exercises to pull questions out of the audience and have an expert panel discuss those topics,” says Carla Maree Vella.

The Stockholm Blockchain Forum will be opened by Ivan Liljeqvist, Co-Founder at Stochkolm Blockchain and world famous YouTuber under the channel Ivan on Tech.

The speaker line-up also includes prominent names such as Taavi Rõivas, former Prime Minister of Estonia; Cherie Aimée, ranked as the sixth most influential woman in blockchain across the globe; Jimmy Zhao, Co-Founder and CMO at ZBX exchange; Christian Ander, the Founder of BTCX and the initiator of the Swedish Riksbank digital currency project E-krona; Henrik Hjelte, Co-Founder at ChromaWay which is collaborating with the Swedish government to put property ownership registries on a blockchain; Vahid Toosi, Co-Founder of EOS SW/EDEN; Mikael Wintzell, Co-Founder and CEO at Wellstreet; Shahjahan Yousuff Khan, CEO at Tokenine; Toni Nijm, CSO at CPA Global; Dr Guenther Dobrauz, Partner and Leader at PwC Legal Switzerland; as well as Frank Schuil at Safello, Sebastian Markowsky at GP Bullhound, On Yavin at Cointelligence, and Raoul Stubbe at Single Technologies among others.

The agenda of the one-day conference features the topics Regulation, DAOs and Decentralized Governance, Banking and Blockchain, Centralised vs Decentralized Exchanges, Investing in Blockchain, Blockchain Applied to Business as well as a number of Thought Leader interviews. Companies are also welcome to present their own case study of a successful blockchain implementation during a one-hour session. The eve before the event is cordially inaugurated with a sponsored C-level dinner organised by the strategic partner Malta AI & Blockchain Summit.

Delegates are expected to learn how blockchain can be implemented into particular business cases, in what ways it can be used to enhance customer and supplier relationships, ROI and operational efficiency, as well as the current status of the technology, regulation, feasibility of adoption and integration requirements. The day will also include a session on how tokenisation of assets can be realised in Sweden in accordance with the current financial regulations.

The conference is sharing its expo floor with four other conferences and exhibitors can benefit from hundreds of key decision makers under one roof. The Stockholm Blockchain Forum is a must-go for anyone who wish to dive deeper into the actual use cases of blockchain and network with C-Suite professionals as well as some of the most innovative start-ups in the field.

Advantages of playing at an Italian bitcoin casino Thankfully, as…
Read post ⟶

Don't be the last to know about latest bonuses, new casino launches or exclusive promotions. Join us today!